We are closer to a nuclear war: An exclusive interview with Dr.Andrey Kortunov 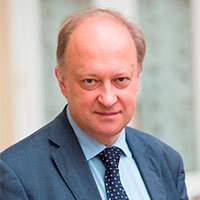 Dr.Andrey Kortunov is the Director-General of the Russian International Affairs Council. The Russian International Affairs Council is a non-profit partnership established by the order of the President of the Russian Federation. He was the founder and first president of the Moscow Public Science Foundation. He taught at universities around the world, including the University of California, Berkeley.

I do not think that it matters a lot how they call it. In any case, this is by far the most intense military conflict in Europe after WWWII. It has deep historical roots, and many layers, including a domestic Ukrainian dimension, a Russian – Ukrainian dimension, as well as a broader dimension of Russia-West relations.

Russian President Putin seems to be a strong leader. There is a view that he is trying to reunify the old Soviet Union and restore Russian power. Some say that this war would never happen if Putin was not in power. Do you agree with this kind of view? What is your observation?

I do not think that President Putin really wants to resurrect the Soviet Union – this is not possible or desirable. But he apparently believes that a hostile and West-oriented Ukraine presents a formidable existential threat to Russia’s security and even to Russia’s mere existence. This crusade seems to be very personal, though Putin is not the only one in Russia, who has such views.

You can make such a comparison though the world today is very different from what it was 60 years ago. It is clear, however, that we are closer to a nuclear war than we have ever been since the Cuban missile crisis. The crisis around Ukraine can escalate to the level of the nuclear war between Russia and NATO.

The U.S. and Europe have maintained sanctions against Russia and the West is seeking to build international opposition to Putin. Do you think western sanctions will seriously isolate Russia?

Russia is used to Western sanctions. Still, these sanctions go far beyond anything that we have seen so far. It is hard to assess the impact of the Western actions, but it is clear that implications for the Russian economy will be very significant. Of course, a lot will depend on whether these sanctions are sustainable overtime or not.

There is an opinion that the Russia- Ukraine war has triggered the most intense tension in global security since the end of the Cold war. In this context, do you think the post-post-cold war era has begun?

I would say that the post-cold war era has come to its end. However, we still do not know what is downing upon us. It seems that the new cycle in global politics will be very volatile and hard to predict. Let us hope that humankind will find ways to manage emerging risks properly.