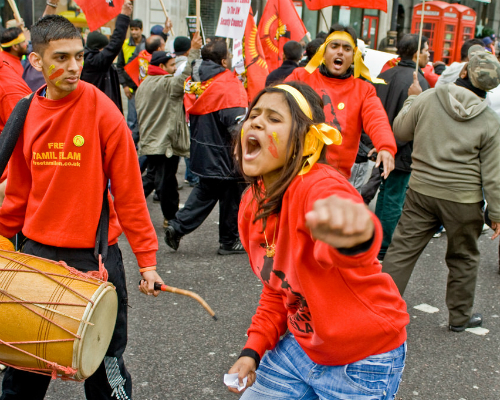 Diaspora’s participation in homeland politics has been a subject of debate and discussion among scholars and policymakers. There are conflicting perspectives on this matter, especially in regard to the political activism of diasporas from war-torn countries.  One argument, calls for the diaspora to play a supportive role and support the political positions taken by the leadership in their homeland.Another perspective rejects this argument by asserting that the diaspora should be treated as an equal partner in the politics of their homeland.Another view is anchored on the concept long-distance nationalism.  Here the political involvement of the dispersed people in their ‘homeland’ affairs is described as long-distance nationalism where long-distance nationalism is imputed with negative connotations, particularly so, in regard to diasporas from war-torn countries.

Benedict Andersen, who has gained global attention for his work “Imagined Communities”, cites a story in one of his lectures[1]titled ‘Long-distance nationalism, World capitalism and the Rise of Identity politics’. By citing this particular anecdote, Andersen seeks to characterize long-distance nationalism negatively as political participation without responsibility. The narrative is about the involvement of a Punjabi businessman in Canada in the politics of his homeland. Andersen is critical of such involvement on the grounds that people such as these contribute and participate in a political space without undergoing the suffering of the people on the ground, while at the same time pursuing material comfort for themselves and their families in the countries in which they are domiciled. Andersen describes this kind of participation as ‘an act without responsibility’.

This paper questions the validity of this interpretation of long-distance nationalism by capturing the broad dimension of diasporas’ political activism by taking a transnational perspective.

Transnationalism looks upon transnational communities as entities living in a single space or field that transcends national borders. Thus, transnational actors are seen to engage in societal activities in the political, economic, social, cultural and religious spheres in that space or field. In coining the term long-distance nationalism, ‘long-distance’ refers to the physical distance between the country of origin and the places where the diasporas live. This physical distance’ approach is in contradiction with the ‘space’, approach where space is not bound by physical closeness, but with all kind of relations and affiliations that take place within the space. Among transnational communities and diasporas, especially for those communities from war-torn areas, involvement in the affairs of their countries of origin or ‘homelands’ is crucial, despite being located in different places. Through their participation, they become members of a society that transcends the territorial borders of the nation states. In this sense, transnational communities challenge the traditional sociological notion of society that was built upon methodological nationalism, seeing society as a group of people within the borders of the national states that form a society.

By adopting a transnational paradigm to view the world, one can easily identify those transnational communities as a part of global society that exists in a single space at different locations. In a globalized world, time-space compression makes the distance comparatively less important than in earlier periods. Furthermore, many countries (including the UK) have adopted double citizenship arrangements and many members of transnational communities are now dual citizens, thus gaining the rights to participate in all social spheres including deciding the politics of the country of origin and country of settlement through exercising their voting rights. Many live in both countries throughout the year, some months in one home and rest in the other. In such a complex scenario, this paper questions the validity of the concept of long-distance nationalism in regard to the activism of members of transnational communities (including diasporas) in the political affairs of the countries of origin.

The argument of “Irresponsible activities”

In situations where states, with the support of other states with whom they are united through their statehood and  operating  as a  ‘states club', mount oppressive actions against their people,  it is the political activism of the transnational communities and diaspora  that has been able to  challenge  state domination and strengthen the agency of the people fighting for their rights.

Furthermore, the claim of ‘safe participation’ in the politics of the countries of origin while living in a country of settlement, as in the case of the Punjabi businessman cited by Andersen, is questionable in an era where the  fight against global terrorism’, many countries have designated organisations that wage armed struggle against the states as 'terrorist organisations’. Those who support such organisations take the risk of being penalised or criminalised. For example, in 1997, the United States designated the LTTE as a terrorist organisation (the first time a Western country to do so) and many other countries followed suit with the UK in 2001, EU in 2005 and Canada in 2007. Tamil diaspora members who participated in transnational political activism through the LTTE faced the risk (or consequence) of the political decisions they made. Though the risk of participation has increased since the ‘terrorist’ designation, there were arrests and court cases against those who engaged in transnational political participation even before these designations. During the period of LTTE headed transnational political activism, there have been police and legal actions against the activists in Germany, Canada, Australia, Denmark, US, France, the Netherlands, UK, and Switzerland. Though these arrests were made under the laws of these countries in respect of unlawful activities, the political motive behind these legal actions was to suppress the activism. This has not gone unnoticed by those targeted. The actions taken by the Canadian government in deporting diaspora political activist SureshManicavaskam in 1995 by declaring him to be a person belonging to an inadmissible class in Canada is a clear example of this highly politicized legal action. In countries like France, Germany, The Netherlands and Australia activists were investigated, charged and punished. The Trial in Switzerland continues awaiting a verdict.

In this context, this paper makes the point that diaspora political activism has its consequences for activists in the countries of settlement where they are involved in such activism. Hence, the notion of ‘safe participation’ is highly questionable.

Sarvendra Tharmalingam is a social researcher and holds a PhD in Human Geography. This is an edited version of an earlier work.