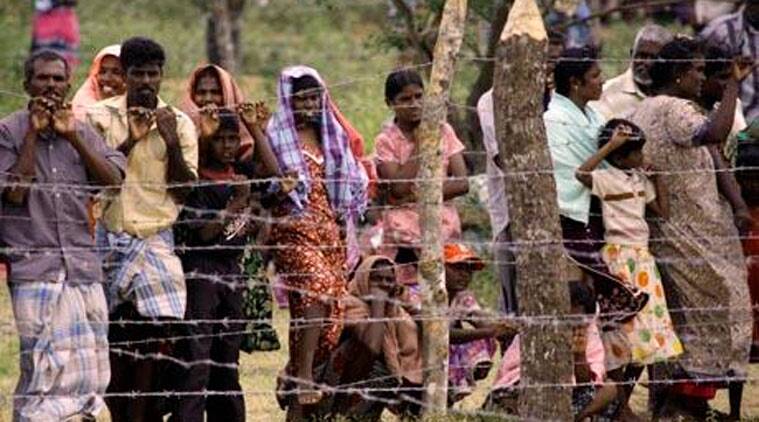 In the famous quote in Shakespeare’s play Hamlet, Act 3, Scene 1, in the opening words of a soliloquy, Hamlet asks himself, “to be, or not to be”. The Prince of Denmark is faced with a great dilemma. His mother married his uncle after his father’s suspicious death. The ghost of Hamlet’s father told him the whole thing was shady. What is the young prince expected to do?

Sri Lankan refugees in Tamil Nadu, approximately 1, 00,000 in number, both in the camps and outside, have been living in a similar predicament for more than three decades. Their hope that they would be conferred Indian citizenship was kindled with the landmark judgment delivered by the Madurai bench of the Madras High Court on June 17, 2019. On an appeal made by refugees of Indian origin in the Kottappattu camp in Trichy district, and a few others living in the camps in other districts, the honorable judge instructed the Government of India to consider their applications for conferment of Indian citizenship, Ulaganathan and 64 Others Vs The Union of India represented by the Ministry of External Affairs and 8 others.

The judgment came in the backdrop of the Citizenship Amendment Act, 2019, which is intended to provide citizenship for Hindus, Christians, Sikhs, Buddhists, Jains, and Parsees who have come from Pakistan, Afghanistan, and Bangladesh and have sought asylum in India. The most glaring omission from the list is Sri Lanka, where Tamils have been discriminated against for several decades and have been subjected to savage violence at regular intervals. They were forced to come to Tamil Nadu as refugees from July 1983 onwards. Their applications for Indian citizenship have been rejected, whereas under the Citizenship Amendment Act more recent immigrants have been given preferential treatment.

For those who have been taking a keen interest in the legal status of Sri Lankan refugees, it came as a shock when recently it was reported that the Government of India had decided to file an appeal against the Madurai bench of the Madras High Court judgment. The appeal, according to the available affidavit, is based on two premises. 1) The respondents are “illegal migrants” within the meaning of Section 2 (1) (b) of the Citizenship Act, 1955. Notwithstanding their technical status as illegal migrants, the Madurai Bench of the Madras High Court had directed the Government of India to consider their applications for citizenship “keeping in mind the sovereign authority has the power to order favorably to them”. There is a specific bar in sections 5 (1) and 6 (1) of the Citizenship Act that an “illegal migrant” cannot be registered or naturalized as a citizen of India. 2) All Sri Lankan refugees are on the same footing as the writ petitioners. So, the order passed on the writ petition “may open Pandora’s Box for illegal migrants to seek citizenship in the country.

The authors would like to quote late Justice V R Krishna Iyer, who enriched Indian jurisprudence and stood up for the poor, underprivileged, and marginalized. In The State of Punjab and Anr V Shamlal Murari and Anr, Justice Krishna Iyer rightly pointed out: “We must always remember that processual law is not to be a tyrant, but a servant; not an obstruction, but an aid to justice”. It is in this context that we are giving below certain facts.

If the Sri Lankan refugees are “illegal immigrants” the logical step should have been to deport them. No such step has been contemplated so far. What is more the UNHCR office in Chennai has to certify the “voluntariness” of their repatriation.

The stance taken by the Government of India is a classic example of an oxymoron. In all statements of the Central and State Governments, the term refugee has been used. It must also be pointed out that the Government is spending a considerable amount on the upkeep of the refugees. The expenditure is initially undertaken by the Tamil Nadu Government but subsequently reimbursed by the Centre, except on those items where the Central Government has not given prior sanction.

In the absence of a national refugee law, India has not defined the term refugee. Refugee status was conferred on all those who arrived in Tamil Nadu by sea and air from July 1983. Most of them were accommodated in refugee camps. Those who told the Rehabilitation Department that they can fend for themselves were asked to register themselves in the nearest police station where they intended to live. According to the Policy Note, 2019, issued by the Government of Tamil Nadu, as of April 1, 2019, 18,871 families consisting of 60,438 persons are staying in 107 camps scattered across the State. In addition, 34,684 Sri Lankan refugees are staying outside the camps as non-camp refugees.

Though the Fourth Eelam War ended in 2009 the repatriation of refugees to Sri Lanka is taking place at a snail’s pace. According to UNHCR sources, between 2002 and 2020, 17,718 refugees have been repatriated. According to the Policy Note, between 2014 and March 2019, only 4017 refugees have gone back to Sri Lanka. The overwhelming majority of refugees, whether Indian origin Tamils or Sri Lankan Tamils, would probably like to acquire Indian citizenship and settle down in India.

Since there is no refugee law in India, refugees are treated as aliens. They are covered by the Registration of Foreigners Act, 1939 (Central Act 16 of 1939) which applies to all foreigners. The Foreigners Act 1946 (Central Act 31 of 1946) empowers the State to regulate the entry, presence, and departure of foreigners in India. The Passport (Entry into India) Act, 1920 (Central Act 34 of 1920), the Passport Act 1967 (Central Act 15 of 1967) govern the entry and departure of persons. Further, under the Constitution of India, certain fundamental rights - The Right to Equality (Article 14), the Right to Personal Life and Liberty (Article 21), and the freedom to practice and propagate one’s religion (Article 25) are guaranteed to citizens and non-citizens alike. These provisions, it must be pointed out, are in contrast to certain other rights such as the right to move freely throughout the territory of India, reside and settle in any part of India, practice any profession in India, etc (Article 19) which are available only to citizens. It must be highlighted that the judiciary has played a great role in upholding and protecting the rights of the refugees. In the famous case, NHRC v The State of Arunachal Pradesh, the Supreme Court held: “The State is bound to protect the life and liberty of every human being, he be a citizen or otherwise”. The National Human Rights Commission also acts as a watchdog as far as refugee rights are concerned.

The Dravida Munnetra Kazhagam (DMK), which came to power in Tamil Nadu, after a stunning victory in the Assembly elections, has held out the promise of citizenship to all refugees who want to acquire it. The DMK has two options. The first option is to request the Central Government to include Sri Lanka in the list of countries – Pakistan, Bangladesh, and Afghanistan – which are covered under the Citizenship Amendment Act, 2019. The two obstacles in the way of Sri Lankan refugees, namely the Central Government circular to the State Government that the refugees are not entitled to Indian citizenship and second, the statement that Sri Lankan Refugees are illegal immigrants and, therefore, are not entitled to Indian citizenship, must be immediately withdrawn. The terms and conditions applicable to those who have sought asylum in India from Pakistan, Afghanistan, and Bangladesh must be made applicable to all Sri Lankan refugees. In other words, the Central Government should not discriminate against Tamil Refugees from Sri Lanka. They are victims of large-scale ethnic violence (ethnicity also includes religion) and by any standard, moral or legal, deserve the same treatment. They have lived here for several decades and have contributed to value addition. The inclusion of Sri Lanka, along with three countries, may require a constitutional amendment, but if the central Government sponsors it should not be a problem to get the required number of votes.

The second option is riddled with difficulties. As is well known, India is not a signatory to the 1951 United Nations Convention on the Status of Refugees and the 1967 Protocol. The Government of India, on December 29, 2011, had issued a Standard Operating Procedure (SOP) to be followed by all Government agencies, while dealing with foreign nationals, claiming to be refugees. If the claim is prima facie justified, on grounds of a well-founded fear of persecution on account of race, religion, sex, nationality, ethnic identity, membership of a particular social group, or political opinion, Long Term Visas (LTV) could be granted. Initially, it is granted for one year but could be renewed, year after year. A person, who has been granted LTV, can acquire property and take up jobs in the private sector. After 12 years of LTV, the person can apply for Indian citizenship, and if he fulfills conditions laid down by the Government of India, he is granted Indian citizenship.

As far as camp refugees are concerned, certain important questions remain unanswered. If a camp refugee, with LTV, who acquires property and gets a job in a private sector undertaking, will he have to forego the financial dole, free accommodation, etc that he is presently entitled to? Or is LTV applicable only to non-camp refugees? More important, Sri Lankan refugees have to live in the present state of Trishanku for another 12 years after LTV is granted (unless their period of stay is calculated from their date of arrival, with retrospective effect) The citizenship application would have to be considered on an individual basis and given how Indian bureaucracy functions, how many years will it take for the applications to be disposed of? By the time a final decision is taken the head of the refugee family, in all probability, would have died. To avoid all difficulties the Government of India should straight away consider all Sri Lankan refugees living in India for over 12 years for naturalization.

According to perceptive observers, the Tamil Nadu Government prefers the second course of action, despite uncertainties inherent in its implementation. The Chief Minister wants to play a crucial role in national politics and he wants to oppose the Citizenship Amendment Act, tooth and nail. He hopes that such a policy would catapult him as the rallying point for all opposition parties.

A policy of confrontation with the Centre on the question of citizenship for Sri Lankan refugees would do more harm than good for the cause of Sri Lankan refugees. On the contrary, the need of the hour is reconciliation with the Centre and persuasive diplomacy. A great responsibility falls on the newly appointed Minister of State from Tamil Nadu. If Tamil Nadu argues the case, with persuasive skill and legal finesse, the Home Ministry may revise its stance.

A policy of confrontation with the Centre would be self-defeating. The need of the hour is cordial Centre-State relations. Otherwise, Sri Lankan refugees would become a football to be kicked around by vested interests.