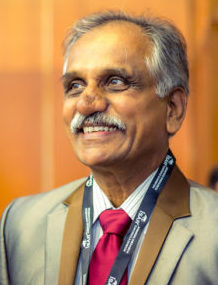 China’s influence in Sri Lanka has grown remarkably in recent years. It is apparent. Against this background, there is a prevalent opinion that India faces critical setbacks in Sri Lankan soil as a regional power. Some Tamil commentators describe this as a failure of India's foreign policy on Sri Lanka. What is your observation?

There are no doubts that China has slowly made inroads in India’s neighbourhood  and in the case  of Sri Lanka there is evidence of the deep engagements with India’s southern traditional friend. It takes two to tango. India has been supportive of Sri Lanka’s initiatives on many fronts.

However, the Chinese ability to invest in different countries using its deep pockets is unmatched and that is a big incentive for developing countries. This comes unfortunately with a tag of debt trap diplomacy and even Sri Lanka has realized that there is a price that it has to pay. Hambantota is a classic example of how the state had to give away the port and prime land for 99 years to avoid the increased loan burden.  I will not see this as a failure of foreign policy of India but as the economic viability to engage economically with Sri Lanka. So it is real hard politic that we need to come to terms with.

There is no secret that China provided a considerable amount of arms to Colombo during the final phase of the war. Sarath Fonseka, the wartime Army chief, admits this. It was the refusal of the Indian government to sell offensive weapons that made Sri Lanka turn to China, he said. There is the view that if India had intervened directly in the final war, it could have prevented China's infiltration into Sri Lanka. Can it say it was a strategic mistake of India that decided not to intervene directly during the final war? What are your thoughts?

All the available records do make it clear that India supported the war against LTTE to the hilt. The real time intelligence and the coordination was a major factor that made it easy for the Sri Lankan Armed Forces to have a decisive victory against the LTTE. Analysts should not overlook the fact that many western nations were involved in the war.

The proscription of the LTTE as a terrorist organization by many nations made it again possible for funds squeeze and intelligence sharing at the global level much to the detriment of the LTTE’s campaigns. If the maritime front was not secured by active cooperation with the Indian Navy, the Indian Coast Guard and the State Police, the LTTE would have continued to get their requirements. Yes, it is true that some of the demands for heavy weapons were not met due to local politics and opposition by the leader of DMK — the late Karunanidhi.

Ten years back, China was not a subject in Sri Lanka's political discourse. Today, the situation has changed dramatically to the point where it is impossible to have a conversation on Sri Lanka without China. Why is China so concerned about Sri Lanka? Perhaps, it seeks to use Sri Lanka as a bargaining chip against India? How do you see this as a military strategist?

It is not correct to say that China was not a subject in Sri Lanka. Post the last Eelam war, China engaged deeply with the then Mahinda Rajapaksa Government. China’s interests were to find a footprint in the Indian Ocean Region, and it used the post war scenario of rebuilding the nation by providing the money.

China, to gain access, did not mind the losses in a port that is yet to make any profit. Sri Lanka fell into a debt trap and has lost any control over its own territory for some three generations. I do not think that Sri Lankans need to be happy about this development. On using Sri Lanka as a bargaining chip, I do not see any scope there. China will continue to invest with the help of the present political dispensation to serve its long-term interests. Sri Lanka as an obliging nation seems increasingly in the tightening embrace of China. I think China will use Sri Lanka with limited measurable benefits except in investments which again are heavily loaded in favour of Chinese businessmen.

The formation of the Indo-Pacific and the Quad have changed the strategic picture of the Indian ocean. In 2018, the Pacific Command was renamed as US Indo-Pacific Command. In April 2019, India set up an Indo-Pacific wing in the Ministry of External Affairs. Based on this, China says it is an effort to build an Indo-Pacific NATO. This clearly illustrates the military significance of the Indo-Pacific strategy. In this context, China has recently warned Dhaka against joining Quad and said, ‘if Bangladesh did so, it will 'substantially damage' bilateral relations between China and Bangladesh. I think China can warn Sri Lanka the same way, and the Chinese strategic tradition advises us 'killing one to warn a hundred'. What will be the position of India's neighbours, particularly Sri Lanka, in terms of Indo-Pacific and Quad?

The fact that China goes round warning India’s neighbours about joining Quad itself shows that it is rattled with the potential of the alliance. It is not just military angle but has expanded the scope to initiatives such as vaccination, resilience of the supply chain, climate change and other issues.  So the partners are not worried about China’s hollow noises and are moving forward to add more value to this alliance in the Indo-Pacific.

While there is no foreseeable possibility of the Quad developing into a NATO like alliance, the enhanced levels of cooperation, interoperability, intelligence sharing and multi-level engagement will provide enough leverage for the four to apply pressure on China. To the credit of Sri Lanka, the Foreign Minister Admiral Colombage has clarified in many forums that he would not like to have a power play in Sri Lanka’s backyard nor will there be any military presence of foreign powers.

However, if China decides to bring its war ships or submarines to Hambantota, there is very little that Sri Lanka can do having given away the complete control of this port to China.  Militarily, India is in a position to take on this challenge due to the geographic advantages it enjoys in the IOR. It may be noted that Hambantota if put to any military use by China is within the striking range of all missiles in the Indian inventory — a fact China would factor this aspect before indulging in any military misadventure.

The port of Hambantota has attracted much attention among the global strategic community, and also it is well known for China's debt-trap diplomacy. Commonly known, this port is crucial to China's Belt and Road initiative as well. Some predict 'It may soon become a forward military base for China's growing blue-water navy' Former US Vice President Pence also remarked this once. How do you see this as a military analyst?

Please see my response to question four above. As brought out, China will have to think twice before using Hambantota as a military base in the IOR. As of now I do not see any signs that Sri Lanka will welcome this move. I am not talking about routine turn round of war ships to extend their staying power and range but about the militarization of this port on the scales of Djibouti which looks unlikely.

If it does manage to convert Hambantota into a forward military base, then Sri Lanka has to blame itself for encouraging a powerplay in its backyard. In the worst-case scenario of Chinese deciding to use this as a military base, India is prepared to deal with this challenge. It may be also noted that the new Colombo International Financial City would see heavy investments and is also vulnerable to attacks in times of crisis. So it is unlikely that any militarization of Hambantota will take place in the near future.

The exit of the United States and the Taliban's return to power has brought a drastic change in the political order that prevailed in South Asia. Some expect that Afghanistan could become a terrorist haven once again because Afghanistan was formerly an Al Qaeda's belt. Some predict that China will incorporate Afghanistan into its Belt and Road Initiative. All these issues create tension in the security of the Indian Ocean region because, where the Taliban were in power, they sheltered pro-Pakistani militants. What are the possible impacts on India's security in particular? And what new implications do you think this will have on the security of South Asia?

Of all the recent developments, the withdrawal of the US forces from Afghanistan and the takeover by Taliban has the gravest impact on security and stability in the sub-continent.  Pakistan seems very happy with the development as it would like to work with Taliban to launch terrorist attacks on India.  In the past, even the soil of Sri Lanka was used by the Pakistan Embassy to launch missions in Southern India and luckily this was nipped in the bud and the concerned envoy removed from Colombo. A closer cooperation is necessary between Sri Lanka and India to ensure that the hood of terrorism is not raised here. Sri Lanka is yet to recover from the aftermath of the terrorist attacks in Sri Lanka by Islamist terrorists.

From the Indian point of view with the past experience of dealing with transborder terrorism, the security and intelligence agencies appear well prepared for the possible escalation along the border with the collusion of the ISI with Taliban and LET. The Mumbai terror attack on 26/11 in 2008 has brought home many lessons and the entire maritime security architecture has been revamped. One has to exercise greater vigil more so against the use of the sea for launching suicide attacks and for other unlawful activities such as drug/arms smuggling. Since a substantial portion of the Taliban economy is dependent on drug sale through cartels, both Sri Lanka and India need to work together to see that the seas are not used for acts against the state. China which is the new player in Afghanistan will take some time to settle down and how it plays its role in maintaining stability in Afghanistan is to be monitored.

Without any doubt, it would like to invest in Afghanistan to extract the natural resources and also to provide a link to the Central Asian Republic countries and beyond. The only challenge it has is to ensure that the Taliban does not provide any support to the insurgency in Xinjiang where the Uyghur’s are being subjected to inhuman treatment and are being denied their freedom to practice the religious practices of Islam. Taliban would be happy to keep quiet as long as the money keeps flowing into their coffers one way or the other. From that point of view, that even Muslim nations have not voiced their concern on the treatment of minority Muslims in Xinjiang makes it clear that China has been able to buy their silence by heavy investment flow.

Taliban will have impact on South Asian society : An exclusive interview with Prof.K.Warikoo
1 day ago

...
Protecting human rights without the United States: A response to Ron Ridenour
6 months 2 weeks ago
...
Inherent bad faith: Alternatives for deducing the Indo-Lanka Accord
8 months ago

...
The destruction of the Jaffna University memorial: Dire straits across Palk Strait
9 months ago