An EXCLUSIVE Interview with S I Keethaponcalan 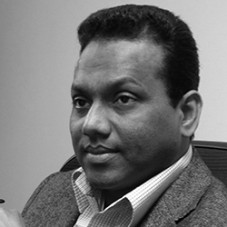 Dr S. I. Keethaponcalan is Chair of the Conflict Analysis and Dispute Resolution Department at Salisbury University, Maryland. Formerly he was Professor of Political Science and head of the Department of Political Science and Public Policy at the University of Colombo, Sri Lanka. He has served as a researcher and research fellow in several international agencies, including the United Nations Institute for Disarmament Research in Geneva, Switzerland, the Bonn International Center for Conversion in Bonn, Germany, and the Peace and Governance Program of the United Nations University in Tokyo, Japan

Dr Keethaponcalan has published widely on conflict and peace-related issues in Sri Lanka and South Asia.

This is an exclusive interview given by Dr Keethaponcalan to CSST.

It now seems clear that Sirisena had no intention of addressing Tamil aspirations nor was there any attempt on the part of Wickramasinghe to effectively counter Sirisena on this particular issue. In your view why did the TNA continue to pin its hopes on a new constitution?

It was very clear since the inception of the constitutional reform process that the process will not succeed. In other words, we knew that the process would not lead to greater autonomy for the North-East provinces. The main problem is with the Southern polity that does not feel the need to devolve power in order to address the ethnic conflict. Many in the South believe that there is no ethnic issue in the country.

The reality is that the South would not concede without adequate pressure. Why would any government devolve power if it is not under pressure to do so? Pressure could have emanated from the International community, India or Tamils locally. The international community and India were interested in working with Sri Lanka rather than completely opposing it. In order to create an environment for concessions from the South, the TNA, the main political party representing the Tamil people should have been proactive. Instead, the party adopted a subversive approach thinking it needs to collaborate, always. That was a strategic blunder.

Also, Tamils currently don't have a fully independent leadership. An important segment of the TNA leadership is pro-UNP. It is unfortunate that the main Tamil party has been led by sympathizers of Southern parties. These elements know that there will be no constitutional reform to address Tamil issues. They are wittingly misleading Tamil people.

History tells us that merely appealing to fairness and justice alone in winning Tamil rights has proven to be futile. Instead, it requires effective bargaining from some position of strength.  What strategy should the Tamil people employ to bargain with the Sri Lankan state effectively?

Given Sri Lanka's strategic location in the Indian Ocean, the US, the Super Power, China the aspiring Super Power and India the Regional Power have shown enormous interest in bringing Colombo under their influence. Do you believe that the Tamils can exploit this interest to their advantage?

I don't believe that Tamil leadership is smart enough to use international realities to their advantage. I would suspend our unconditional support to India first. Float the idea that we are no longer loyal to India. Also, then take it from there. India takes Tamils for granted because Tamils are always loyal to India. Make a distinction between India and Tamil Nadu. Build sustainable relations with Tamil Nadu.

It is argued that at the end of the day countries are primarily driven by national interests in their actions. Liberal values such as human rights, Justice, international law, economic cooperation, and the promotion of democracy only serve as a convenient tool to advance the interests of the international actors- the West in particular. Do you believe that there is an intrinsic value in Liberalism and the Tamil people can rely on promoting these notions to secure a political solution?

1(Editor's Note: "An opposition shop is good even among greengrocers" as translated by Rev Percival in "Tamil Proverbs with their English Translations", Dinavartamani Press Mylapore, 1874,p241)

...
Protecting human rights without the United States: A response to Ron Ridenour
5 months 3 weeks ago
...
Inherent bad faith: Alternatives for deducing the Indo-Lanka Accord
8 months ago

...
The destruction of the Jaffna University memorial: Dire straits across Palk Strait
8 months ago

...
Zeitgeist, Imperiums and Ontological Security: Cues and Insinuations on Developments in Sri Lanka
1 year ago