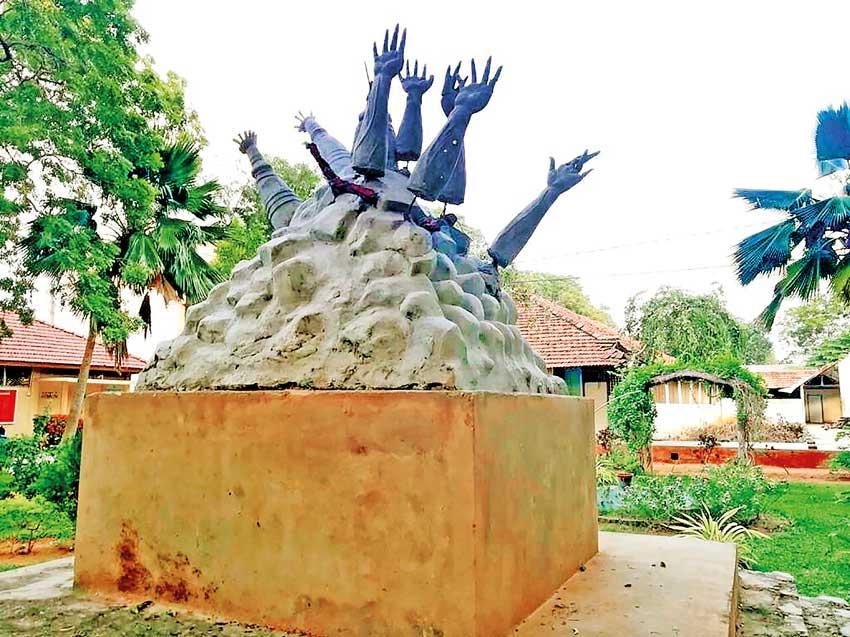 By: Centre for Strategic Studies – Trincomalee

The matter has now come to an end following continuous protests by students. That is, the university vice-chancellor — who ordered the demolition — has announced that he will re-establish the monument with legal permission. A foundation stone has now been laid to this effect.  If legal permission is the issue, the existing monument could have been legally secured without running it over with a bulldozer. There is no need to lay the foundation again after such demolition. Meanwhile, the Chairman of the University Grants Commission, Senior Professor Sampath Amaratunge, commented that the monument erected at the University of Jaffna was an obstruction to reconciliation. But the Vice-Chancellor of the University of Jaffna did not say so.

The matter has been calmed down by the same person who ordered the demolition of the monument. But the political repercussions of this are far-reaching. Recently, Indian External Affairs Minister S. Jaishankar paid a three-day official visit to Colombo. During the visit, he met and spoke with various quarters that included the head of state and leaders of the Tamil National Alliance. Jaishankar stressed the need to find a political solution based on the 13th Amendment that would treat the Tamil people with dignity. This would not have pleased the South for sure. Jaishankar has reiterated India's commitment to the 13th Amendment, as voices have been growing in Sri Lanka’s south calling for the repeal of the 13th Amendment. At the same time, India has expressed concern over the development of the North-East.

This certainly has caused a crisis for the ruling BJP. At the same time, the comments made by the Vice-Chancellor of the Jaffna University is embarrassing. There is a video clip of him circulating https://www.youtube.com/watch?v=XpSDQSre9h8 , in which he states that R. Sampanthan had gone to the Indian High Commission in Colombo because there were problems in Tamil Nadu. This gives a strategic importance to the memorial issue. If the problem with the university is that the memorial is actually installed outside the law, then the vice-chancellor need not worry about India and Tamil Nadu’s politicians. Sri Lanka is a sovereign country. Therefore, a decision that can be taken within the legal framework of Sri Lanka need not be linked to India and Tamil Nadu.

It is also important to know who will benefit the most from what the vice-chancellor is openly saying. Following Jaishankar’s visit, allegations among Sinhala nationalists are rife with Indian interference in Sri Lanka's internal affairs. Against this backdrop, the problem is emerging in India. So it needs to be rebuilt, the vice-chancellor said. This in turn indirectly instigates the Indian opposition in Sri Lanka. Apart from that, the vice chancellor’s claim is also a source of fear in relation to Tamil Nadu. Sinhala-Buddhist nationalists understand the Tamil issue in Sri Lanka in conjunction with Tamil Nadu. Consequently, they see the problem of the Tamil people as part of the Indian expansionist agenda.

In such a context, the destruction of the memorial can be seen as a ploy to strengthen opposition to India in Sri Lanka’s south. On the surface, only the ruins of a monument erected at the University of Jaffna can be seen. But Sri Lanka, Tamil Nadu, and India are the three issues associated with it. In this sense, the monument issue acquires strategic significance. It seems likely that this will have an impact on Sri Lanka-China-India relations in the years to come.

...
Protecting human rights without the United States: A response to Ron Ridenour
2 months 1 week ago
...
Inherent bad faith: Alternatives for deducing the Indo-Lanka Accord
4 months 2 weeks ago

...
The destruction of the Jaffna University memorial: Dire straits across Palk Strait
4 months 3 weeks ago

...
Zeitgeist, Imperiums and Ontological Security: Cues and Insinuations on Developments in Sri Lanka
8 months 2 weeks ago

The Corona: Is China having the last laugh?
1 year 2 months ago