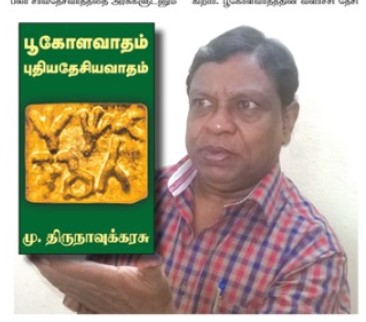 This is a brief review of M Thirunavukarasu’s latest work in Tamil, Globalism- New Nationalism. The book is a well-researched tome of well over 500 pages.

M Thirunavukarasu ’s work, over the last forty years, has been characterized by intellectual rigour and directness. This book is no different. It reflects his deep knowledge of issues that have impacted the Eelam Tamil people’s quest for national and social liberation. Thus it provides an invaluable insight into geopolitical and other international dimensions impacting the Tamil people’s struggle for liberation.

The immense grief caused by the massacre at Mullivaikaal in the final days of the brutal war is identified by the author as that which drove him to write this book. Western methods have been applied with a profound understanding of the Eastern, or more precisely the South Asian mindset in producing this work. Not many intellectuals or writers have adopted this particular approach to their work.  Thirunavukarasu has used this twin approach to enlighten the reader and in the process, several concepts are explained through a narration of historical events and anecdotes.The insights provided are very illuminating.

The book highlights how internationalism, nationalism and globalism are inexorably linked and sheds light on the predicament of Eelam Tamils in this environment. Nationalism is shown to remain a potent force despite the impact of globalization. The author identifies this nationalism impacted by globalism as new nationalism.

It is a book that exposes the Eelam Tamil people’s predicament as the product of the present world order shaped by globalism, internationalism and nationalism in all its forms.

The book has the potential to help people confronting genocide overcome their plight through an intellectual understanding of the forces at play. Should the Eelam Tamil leadership arm itself with this knowledge and act upon it, they can liberate their people.

The author’s declaration that this work was prompted by the immense grief he had experienced following the massacre at Mullivaikaal; the writing of it must have been a cathartic experience for the author. The reader too may find reading it may help expunge some of the pain caused by the same event.

The reviewer would like to add his own observation that had the Tamil leadership paid heed to M Thirunavukarasu’s writings and observations, matters need not have come to head in the way they did at Mullivaikaal.