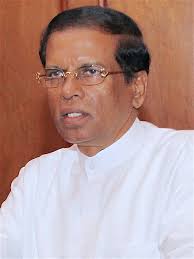 The sacking of Sri Lanka’s prime minister bodes poorly for India and the US but is a welcome sign for China.

The entire country, not to mention the international community, was taken unawares on October 25 when Sri Lanka’s President Maithripala Sirisena sacked Prime Minister Ranil Wickramasinghe and replaced him with Mahinda Rajapaksa, the former president.

It was widely known that there has been tension between Sirisena and Wickramasinghe for quite some time. Relations worsened following the local elections in February this year when the ruling coalition performed badly and Sirisena blamed Wickramasinghe. In March, Sirisena relived Wickramasinghe of several institutions under prime ministerial control, including the country’s Central Bank.

Adding an international dimension, the major point of contention between the president and the prime minister revolved around the delays in implementing joint projects agreed upon between Sri Lanka and India. Whereas Wickramasinghe remained committed to implementing the projects, Sirisena was not. At a cabinet meeting on October 17, Sirisena and Wickramasinghe clashed over handing over to India the development of the East Terminal of the Colombo port.

In November 2014, Sirisena, then the minister of health in the Rajapaksa-led United Peoples Freedom Alliance (UPFA), had surprised Rajapaksa by aligning himself with the Wickramasinghe-led United National Party (UNP) to challenge Rajapaksa at the presidential elections in January 2015. Sirisena won that contest mainly because he had the support of the UNP and Sri Lanka’s Tamil and Muslim communities. Rajapaksa was defeated, despite receiving a majority of Sinhalese votes.

That particular change in government was welcomed by New Delhi and Washington. On January 9, 2015, even before the formal announcement of the election results, Indian Prime Minister Narendra Modi became the first foreign leader to call and congratulate Sirisena on his victory. India had been worried about the Rajapaksa administration’s tilt toward Beijing. New Delhi became particularly concerned after Colombo, brushing aside India’s concerns, permitted two Chinese submarines to dock in Colombo within a space of seven weeks in late 2014.

On the eve of the election, then-U.S. Secretary of State John Kerry had telephoned Rajapaksa to insist that he conduct a “free and fair election” and ensure a “peaceful” handover of power should Sirisena win the ballot. The high-level involvement by Washington in Sri Lanka’s presidential election was not surprising. The United States had been deeply worried about Sri Lanka’s drift toward China under the Rajapaksa presidency for years. A December 2009 U.S. Senate Foreign Relations Committee report, “Sri Lanka: Re-charting US Strategy after the War,” noted that Sri Lanka’s strategic drift toward China would have consequences for U.S. interests in the region and stated that “the United States cannot afford to ‘lose’ Sri Lanka.” It called for increasing U.S. leverage vis-a-vis Sri Lanka by adopting a multifaceted, broader, and more robust approach to secure U.S. interests.

In an interview given to an Indian journalist, Rajapaksa accused the West of working with the Research and Analysis Wing (RAW), India’s intelligence service to oust him.

The new administration was successful in introducing the 19th amendment to the Sri Lankan constitution, which limited the president to two terms and stripped the president of the power to dismiss the prime minister. The former ensured Rajapaksa, having already served two terms, could not return to power and the latter appeared to secure Wickramasinghe continuing as prime minister.

Much to the disappointment of India in particular, Sirisena showed little enthusiasm to stem Colombo’s drift toward Beijing. In late 2016 Sri Lanka agreed to buy military transport airplanes from China; the next year Colombo signed a deal give 70 percent of the Hambantota deep seaport on a 99-year lease to China for $1.1 billion. The Sirisena government also offered to renew the Chinese-funded Colombo Port Project, which had been suspended after the transfer of power.

Meanwhile, Sirisena’s government continued to delay implementing several India-funded projects, a policy in keeping with that of former President Rajapaksa. At the same time Sirisena ruled out any alliance with Rajapaksa loyalists on the grounds that they will not join him to form a government.

Still, it soon became clear that Sirisena’s anti-Delhi position had hardened. Matters came to a head on October 16, 2018 when Sirisena accused India’s RAW of plotting his assassination, an allegation described as “wild and bizarre” by the chairman of The Hindu, a leading Indian national newspaper. Sirisena later told Modi in a phone call that “his words had been misquoted and distorted,” and “denied having said that Indian agencies would be involved in the case in any manner,” according to an Indian government spokesperson.

Sirisena’s subsequent action of dismissing his prime minister and appointing his nemesis Rajapaksa to that position proved to be even stranger than the RAW accusations. That decision has the potential to completely reverse the election results of 2015 – which were seen as stemming Colombo’s drift toward Beijing and helping New Delhi reassert its role as the regional hegemon.

Beijing promptly demonstrated its satisfaction with the developments. Chinese President Xi Jinping emerged as one of the first world leaders to congratulate the newly appointed Prime Minister Mahinda Rajapaksa.

The first reaction from India came not from the prime minister but from Subramaniam Swamy, an upper house member of the Bharathiya Janatha Party (BJP), India’s ruling party. Swamy congratulated Rajapaksa and suggested that India “would benefit by having good ties with Sri Lanka under Rajapaksa’s leadership.

But this does not appear to be the position of the Indian government. New Delhi is constrained in dealing with a government in which Rajapaksa is prime minister, and not only because of his well-known anti-Indian outlook. It is also constrained by the strong anti-Rajapaksa sentiments prevailing in the south Indian state of Tamil Nadu, where all political parties and key political figures have unanimously condemned Rajapaksa’s appointment, citing his role in war crimes and mass atrocities committed against Tamils in 2009.

Having maintained silence for two days, New Delhi responded cautiously by calling for the constitutional process to be respected and extending its developmental assistance to Sri Lanka.

Washington was more forthright in its response, urging Sirisena to “immediately reconvene parliament” to allow legislators to quell the constitutional crisis sparked by the sacking of Prime Minister Ranil Wickramasinghe. The European Union joined the United States and the United Kingdom to urge political parties in Sri Lanka to abide by the constitution, which (as mentioned earlier) forbids the president from ousting the prime minister.

Given Sri Lanka’s strategic location in the India Ocean, the interest shown in recent developments by New Delhi, Beijing, and Washington comes as no surprise.

Protecting human rights without the United States: A response to Ron Ridenour
1 day ago
...
An Exclusive Interview with Ron Ridenour
3 weeks ago