India Could Do More for Sri Lanka’s Tamils 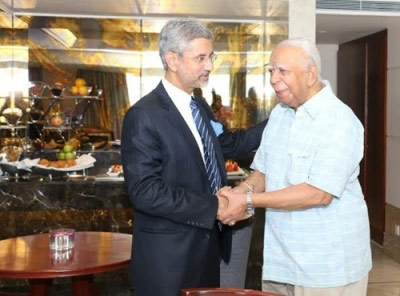 India’s Prime Minister, Narendra Modi, has been relatively quiet when it comes to Tamil issues in Sri Lanka, although now would be a good time for the prime minister to reconsider his low-key approach. Modi visited Sri Lanka in March 2015, the first time an Indian prime minister had travelled to the island nation in nearly thirty years. He even went to Jaffna in the country’s north, a symbolically significant move. During the visit, Modi spoke about devolution and the need to go beyond the 13th amendment to the constitution. He is expected to visit Sri Lanka later this year too.

S. Jaishankar, India’s Foreign Secretary, recently concluded a visit to Colombo. During that time, he met with members of the Tamil National Alliance (TNA) and the Tamil Progressive Alliance (TPA).

“This visit did not receive wide publicity in the media. It was not a front-page story,” notes Jehan Perera, executive director of the Colombo-based National Peace Council.

“I don’t think that India [during Jaishankar’s visit] would have pressurized Sri Lanka,” says Perera. “Like the rest of the international community, they would be oriented to give more time to the government to resolve outstanding issues. India would be more likely to pressurize Sri Lanka on issues that concern its own national security, such as the proposed economic deal with China in Hambantota involving the port, and Sri Lanka’s backtracking on the Indian economic presence in the Trincomalee port.”

With a Bharatiya Janata Party-majority in parliament, a bilateral trade deal in the works, a fisheries dispute still unresolved and Colombo’s recognition that its ability to pivot away from Beijing is – at best – limited, it would be easy for New Delhi to downplay the need for the Maithripala Sirisena administration to address Tamil grievances. Yet that’s precisely what the Modi administration should not do. More broadly, Colombo could be reminded – both publicly and privately – that it can do much more to usher in some semblance of normalcy in that the Northern and Eastern Provinces.

There are now numerous concerns regarding Sri Lanka’s sincerity vis-à-vis its transitional justice commitments. And, there have been assertions that the coalition government, which is led by Sirisena and Prime Minister Ranil Wickremesinghe, is hoping for the Donald Trump administration to help it avoid further scrutiny regarding allegations of wartime abuses. Discarding deeper devolution may not be far behind.

Taylor Dibbert is a freelance writer and consultant. Previously, Taylor worked for human rights organizations in Sri Lanka and Zimbabwe. He is based in Washington, D.C.The article first appeared in The Diplomat

Protecting human rights without the United States: A response to Ron Ridenour
3 days ago
...
An Exclusive Interview with Ron Ridenour
4 weeks ago